22nd March 2016 - sadly I've had to remove the picture of Richard Pardy 'relaxing backstage'. Here's why, as texted to me by Richard yesterday afternoon -

Could l ask a favour pls? Your blogs are legendary & l don't know how you managed to get hold of it, but can you remove a picture of me with 'nipple tassles' pls?! As funny as it is, I've had dozens of people getting in touch, including my mum, & now my kids, (who told me it was on your blog). It was their school friends that found it at school on the school computers?!!! ...but also people that l work for have been taking the piss etc. I've now had a Head of school that l teach at call me in, saying that it's inappropriate as the kids have been passing the photo round at school. I've said I'll deal with it, and as it is also a bit embarrassing, (unless you were there & knew the circumstances), it's a bit weird, & is a top hit on google images now!!! If you could help remove all traces of it pls, l would much appreciate it. No sweat, l think it's very funny, but it has to go pls! Sorry about that & thanks for your help mate:-) 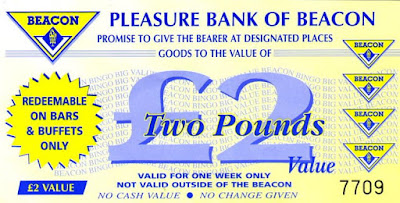 What better way to start 2009 than with a caption competition? Something a bit different this time- can you think of a way to link this photograph of saxophone maestro Richard Pardy* relaxing backstage at last October's Chicago Blues Brothers gig in Tewkesbury with a £2 voucher issued at last night's CBB show at, of all places, The Beacon Bingo Hall in Northampton? No, I can't either- but I couldn't resist putting the two pictures next to each other; no wonder I haven't got any friends...

As I'm in what passes for a good mood in my odd little world I'm not going to say too much about the show- we played quite well under the circumstances if you know what I mean- 'though I did make a comment to Sam the sound man as we watched our support act (2 ladies singing over backing tracks- I think they were halfway through 'Boogie Woogie Bugle Boy Of Company B' at the time, and sounding about as much like The Andrews Sisters as I sound like Pavarotti) which went something like 'all those years ago when I saw The Clash and thought ''I'd like to play the guitar like that''- and now look what's happened...' I guess that makes me a snob? Or miserable? Or both? And I really shouldn't moan- a lot of people didn't have a New Year's Eve gig this year, and it's always better to be working than not working isn't it? Isn't it?? Do I sound convinced?!?

"...and for another one of those tokens I'll take me trousers off as well!"