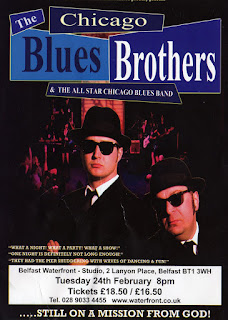 As I opted not to set an alarm Wednesday got off to a late-ish (10.15) start- I made it down in time for breakfast just as they were packing everything away. With several band members opting to go for a spa and sauna at the nearby Culloden Hotel (it's in the same chain as The Stormont, Pete Mike and Tracy did several playback shows in them just before last Christmas) myself and Marc decide to walk up the hill to The Stormont Parliament Building as it's such a nice morning. It's an extraordinary building that looks almost impressive from a distance as it does close up 'though the number of security guards and cameras are reminders of some of the other things the area has been well known for... back at our hotel it's time for some food in the La Scala bistro (excellent!) before a bit of time spent catching up on a few phone calls and attempting to unravel one of the great mysteries of modern life- just how do you register a complaint on a company's website? In this case it's a broken item of baggage with Ryanair but, let's face it, you can e-mail anybody about virtually anything these days and yet to complain about something you have to do so in writing within 7 days of the incident taking place- tricky in a case like this if you're away from home for a week don't you think?- and proof of posting is not proof of receiving, and, and, and...

Anyone would think that they were trying to make it difficult for you, wouldn't they?

Everyone meets at the allotted time of 3 p.m. in the lobby for our journey to The Market Place Theatre in Armagh. We played here 2-and-a-bit years ago and it's a superb theatre; sadly not so many tickets sold this time (that was a Saturday and this, as Pete points out is Ash Wednesday- the beginning of Lent) but there's still enough people in to make it a good, if somewhat eventful, show...
Halfway through the first number 'Peter Gunn' Richard steps forward for his solo. He uses a radio microphone which allows him to walk around the stage while he's playing 'though he's been having a few problems with it lately; at first I thought it was cutting in and out as the notes were all a bit abrupt, but when I looked at him I saw that his face was bright red from trying not to laugh whilst playing. In the background the look on Dave's face could only mean one thing- Richard had broken wind before walking away and, without getting into too much unnecessary detail here, he's almost as good at that as he is at playing the saxophone... when he returns to the horn section riser Dave is cursing and Richard is still laughing. Boys will be boys eh?
Anyone who's seen our show will know that during the aforementioned gospel section Jake becomes the Rev. I.C. Delight, resplendent in church robes and wig whilst myself, Squirrel, Dave and Richard appear as a choir dressed in ill-advised outfits (see the photos on our website for the full gory story) to the general amusement of all and sundry; for this show Dave had kept the candle from the previous evening's birthday celebrations which he lit and carried out onto the stage, an act which I suspect would have given any passing health and safety officer a heart attack. We were just warming our hands around it when it went out; a couple of seconds later Richard's microphone decided to malfunction and send a loud bang through the P.A. and monitors- quick as flash Dave dropped to his knees pretending that he'd been shot (a rather risky attempt at humour in this part of the world if you think about it!) and in doing so his right knee landed on Richard's left foot. Squirrel and myself looked on incredulously as Richard hopped around with Dave on the ground next to him- it was a good job the candle had gone out... brass section eccentricity continued in the second set with the theme music from 'Starsky and Hutch' finding it's way into 'Funky Nassau', and with a somewhat subdued audience finally getting into it all's well that ends well and we all agree that these have been 2 of the most enjoyable shows we've done for ages.

Now the real work begins- time to write a letter to Ryanair. I'll let you know how I get on...

Check the Lew Lewis link above for a classic clip from 1980 with Squirrel on bass!
Posted by Leigh Heggarty at 2:11 pm

The Lew Lewis Reformer Youtube clip feels like it was from the last century! Oh yes, so it was. Takes me right back to those buzzing nights at the Hope & Anchor and Dingwalls etc. etc.

RIP Rick Taylor on guitar and Buzz Barwell on drums, both of them good friends back in the day. So sad to watch the video and know they're gone, way too early. No-one said life was fair.