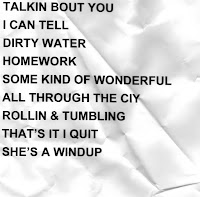 Well there we are then- a triumphant first gig for The Flying Squad, supporting Stray at Tropic At Ruislip last night. A breathless half hour set went down a storm with pretty much all those present, with people coming up to us afterwards to say how much they'd enjoyed it, how it was great to see a band like ours these days and, maybe most intriguingly of all, how we should work up a set as a Dr. Feelgood tribute band. Maybe we should!?!

Myself and Andy arrived in the pouring rain to find Dave and Mike loading their gear in, and Stray all set up and ready to soundcheck. They're a friendly bunch, and sound pretty much how you think they'd sound i.e. a late '60's/early '70's power trio with excellent vocal harmonies. Phil the soundman is an old mate- I think I first met him 10 or 12 years ago when he was running a rehearsal studio in West Drayton- and as we were setting up he asked if we play 'She Does It Right', it wasn't on the setlist so we did it as a soundcheck (it's always good to get the soundman on your side!) along with snippets of 'Rolling and Tumbling' (for Andy's harmonica) and 'All through The City' (for the backing vocals). There was just time for a drink and to say hello to a few people before getting onstage for our allotted 8.45 kick-off time.
First gigs are always a bit weird- suddenly you're all standing in a line instead of facing each other in a rehearsal room (no, I don't know why you never think to have a rehearsal with the band all set up in stage positions either!) and there's no going back to check the endings... my left hand was pretty painful which meant I missed a couple of notes here and there but overall it was a good start to our (ahem) career with the audience reaction building throughout the set to such an extent that Phil the compere asked us to play 'She Does It Right' as an encore (it's always good to get the compere on your side too!) which we duly did- yes, an encore for a support band. Now there's something you don't see every day...

Stray frontman Del Bromham began their set by saying how much he'd enjoyed our set (top man!) and then observed that it wasn't the first time that the flying squad had turned up at one of his gigs as 'I used to be managed by Charlie Kray...'

Enough said I think!
Posted by Leigh Heggarty at 9:21 am