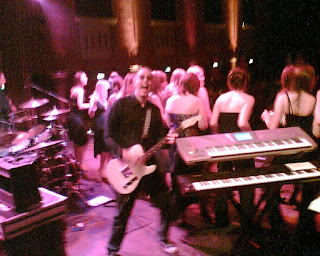 This is the third anniversary of my first blog posting.

I started out thinking that it might be something that I could use as a gig diary, as well as hoping to improve both my typing and computing skills along the way. Well I can now type a lot better than I could (I now use both index fingers!) and I don't find computers quite as daunting as I used to (at least until the next baffling moment comes along of course) but the 'gig diary' format has long since given way to all manner of shamelessly self-indulgent rants and theories, many of which could benefit from some serious editing (yeah, I know...) but which often seem to capture my thoughts in a manner that continues to amuse and occasionally amaze me- sometimes by writing about it I've actually worked out what my opinion is on a particular subject, a bit like talking something through with someone I suppose?

It's also really good fun to do- and for that reason if nothing else, the fourth year stars here...
Posted by Leigh Heggarty at 9:07 am