'This could be the last time' - until next time...

I found out on Friday morning if I'd managed to learn 'Livin On A Prayer' well enough when I joined Glee Club U.K. supremo Richard in his Bracknell recording studio to record the guitar parts. Richard spent a fair amount of time attempting to recreate the talkbox effect that's used on the guitar during the first half of the original recording (I didn't have one handy!) and did a very good job; I used my Relic Stratocaster as I needed a guitar with a tremelo arm for one section of the song (in case you're wondering, it's the 'divebomb' effect halfway through the second verse - I very rarely use one, to the extent that when I came to practice that part I couldn't find it!) and even though I say so myself, it all turned out rather well. Mind you I wouldn't be writing about it here if I'd played terribly...
Saturday evening I went to The Old Fox in Ickenham to see Awaken, and a very odd evening it was too - when I arrived they were halfway through their first set, with a young man slumped unconscious in his seat near the front door and beery builder blokes alternating between ignoring the music completely and slapping each other around the face roaring 'you're my best mate you are' before dancing with each other. The band played a good set but not a great one, seeming a bit out of sorts and committing a setlist faux pas of monumental proportions when they switched from playing material like 'Brown Sugar' and 'I Saw Her Standing There' to a version of 'I Predict A Riot' that cleared the dancefloor in seconds, an incident that somehow summed the evening up for me. So down was I when I got home that I had to watch the Henry Rollins interview from the 'Punk: Attitude' DVD to get my spirits back up - it worked, but that's punk rock for you...
...which brings me to The Price. Malcolm called me mid-afternoon to say that he was halfway to the venue and had forgotten his microphones - as he put it during the show, 'it wouldn't be a Price gig if something didn't go wrong' - and there were the almost inevitable 'sorry I can't make it' messages from various people throughout the day but from the opening of 'Memory' (we hadn't played that one this century!) to the last unrehearsed encores of 'Too Many People' and 'Turning Japanese' it was one of the best and most enjoyable reunion shows that we've done. We were bit scrappy here and there (we had just one 3 hour rehearsal for a 1 1/2 hour show! Mind you that doesn't explain my appallingly out of tune solo at the end of 'The Price You Pay'...) but overall we played well, even including a new song (so new that it doesn't have a title yet!) put together in about 20 minutes from an idea that Malcolm bought in to the rehearsal - you could argue that we'd have used our limited time better by learning the old songs properly, but The Price always did things like that! Plenty of old faces gave us a rousing reception, and it was great to see a few people that hadn't been along for ages; sadly with band members ever more committed to other things it seems that events like this will get more and more difficult to organize which is a shame - still there's always the Sunday nearest to East's birthday next year... talking of whom, I left the man himself outside a kebab shop bemoaning the fact that they weren't serving anymore. I think he'd been drinking...
And The Flying Squad return to show business this coming Saturday (26th) when we support the ever-wondrous Eddie And The Hot Rods at Tropic At Ruislip - we're rehearsing at 4 in the afternoon and on at 8 in the evening!!
Posted by Leigh Heggarty at 7:44 pm No comments:

Devon is a place on Earth (sorry!)

For what we are about to receive... 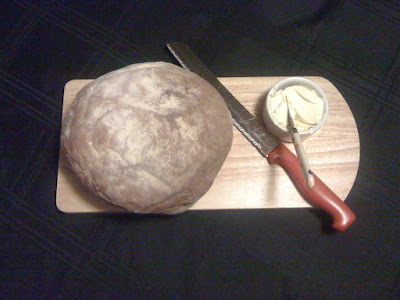 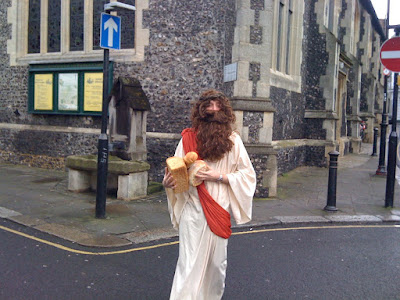 The other evening I went to the Load of Hay with East for a few beers (nothing too unusual there) and a tactical discussion (that's what we call it anyway) regarding the upcoming Price gig at said venue. The evening went on a little longer than we were expecting it to, and we ended up having rather more than a 'few' beers (nothing too unusual there either) meaning that the next day dawned rather earlier than I would have liked it to. I managed to get myself together in time to get a lift into Uxbridge from the long-suffering Shirley ('don't breathe on anyone, you still smell of beer') and stumbled into Balcony Shirts to find Scott (he baked the loaf in the above picture, and very nice it was too!) enthusiastically setting up a video camera. 'Here you are' he said as he cheerily handed me a 'Real Man Bake Bread' t-shirt then explained that we were going to shoot some footage for the video to go with the song he'd written and that I'd recorded some guitar for in the shop several Saturdays ago. Around an hour later we'd recorded everything that he needed; we'd also seriously worried several passers-by who'd innocently looked through the shop window during filming, received some free coffee from Scoffs cafe opposite the shop (you can see Geno from the cafe around 2.15 into the film) and sent Dave out into the street dressed as a well-known biblical character. The video is on YouTube now, and if you'd like to see it then click here. It's worth it. No, really, it is. Oh and in case you were wondering, The Price play what is likely to be our last ever show with the (ahem) classic line-up of Malcolm, Huggy, Paul and myself at 8.30 p.m. on Sunday 20th March at The Load of Hay in Uxbridge. It's East's birthday, so it'll be time for a few beers... and Kris Dollmore is there this Sunday (13th) which should be a good night, and they'll no doubt be serving beer there that night too... perhaps I should stick with bread?
Posted by Leigh Heggarty at 9:30 am No comments:

Just one gig this weekend, on Friday at The Hilton Hotel in Park Lane. They don't normally let people like me into places like that...

It being Friday afternoon I set off in good time to get to the venue for a 4.30 soundcheck, although I also set off early to give myself time to visit (a) the H.M.V. shop on Oxford Street (I've still got some vouchers left from Christmas) and (b) Sister Ray in Berwick Street - unsurprisingly (b) turned out to be a far more interesting option, with your humble narrator heroically resisting various Sex Pistols live recordings (not all of them entirely legal methinks - excellent!) in favour of a 'Punk: Attitude' DVD (for only £3.99! I got one for myself last time I was there, this one's for Dave at the shop) and a CD of the legendary 'Nuggets' album which I've got as a double album on vinyl but have been meaning to get on CD for ages. Great stuff. From there it was down to Green Park on the Victoria line to meet up with everyone in the hotel ballroom, where we're playing at Caravan Diamond Ball charity event. Matt returns as Jake, Tracy's back for the first time this year on backing vocals, Chris is on keyboards and Ian's on saxophone - other than that it's the usual faces in the usual places. Also on the bill are Carwash - I spoke to their guitarist Simon the night before who very kindly let me use his Mesa Boogie Mark V combo, and very fine it sounded too. We've got The Hartford Suite to use as a dressing room, it looks out across Park Lane and it takes a bit of finding but we get there in the end.

We're not on until 10.30 and food is at 8 o'clock so Squirrel, Chris and myself decided that we were actually tourists and that we'd walk down to The Hard Rock Cafe for a visit to The Vault. The first time I visited I chanced upon it when we were playing at one of the other hotels in the area and I managed to have a go on some very rare guitars - these days they're all in cabinets but it's still great to see them. From there we walk to The Kings Arms for a drink or two before returning to the hotel at the allotted time for food in The Harvest Suite - coleslaw sandwiches for me (no vegetarian option! How much does it cost to stay at this hotel?!?) with chicken curry for everyone else. Mine doesn't take quite as long to eat as everybody else's (!) so I decide to take the lift to the 28th floor to visit the Galvin at Windows restaurant (I wonder if there was a veggie option on the menu?) where you can see out across town - it's a clear night and it has to be said that the view is pretty extraordinary. From then on it's 'hurry-up-and-wait' time - it often is at these sort of events - there's a dance troupe on before us, a similar type of thing to 'Stomp' which seems to warm some of the audience up and intimidate others, at least judging by the looks on their faces. We play a short (45 minutes) set which goes down very well, with a fair amount of dancing and a breathless encore of 'Jailhouse Rock'. Simon and myself spent a large amount of time discussing Eric Clapton's guitar sound (he's thinking about bidding for the 1980's Soldano set-up in this Wednesday's 'Crossroads' auction! Good man!) through the ages, Matt spotted Phil Tufnell in the bar and we finished in time for me to get the last train home - a good night all round.