What follows was indeed written when it says that it was written - it appears here unedited except for a bit of tidying up here and there, especially the bits where I couldn't read my handwriting...

Hello from the 11.36 train from Glasgow to London. It's Sunday 7th July and I've got a headache. And I feel like going back to sleep. I won't though - not for a while anyway - as I'm going to write up my memories of the last two weekends of Ruts D.C. gigs for the blog page that I keep saying that I must get around to writing more for, but never actually do... here we go then - stop me if you've heard this one before...

Hot in every sense of the word, both physically and emotionally. Like an idiot I decided to wear a jacket for the first couple of songs - when I tried to take it off I discovered that it had stuck to me. Ah well. I knew I'd be a fashion victim in the end. And nothing had prepared me for (a) seeing a t-shirt with my face on it (Dave and Segs are on it too, but I think you know what I mean) and (b) people not only buying it but wearing it too.
The show itself was to celebrate the 40th anniversary of the 'Babylon's Burning' single being released - since we were unable to ascertain a definite date for this we chose one that it had been in the singles chart on four decades earlier. Any excuse eh? The Pelton Arms in Greenwich is a splendid pub, and it was suitably packed for our show which we streamed live on the band's Facebook page (ooh - for a minute there I sounded almost like I knew what I was talking about didn't I? Anyway here is the footage if you'd like to see it) and which went fantastically well. People travelled far and wide to see us, which was a very humbling experience from our point of view. We really must do an acoustic album one day mustn't we?

Rain of near-biblical proportions held off right until the moment that we got out of our taxi from the train station and discovered that we were at the wrong entrance to the park. Bugger! As the world-weary security guard put it, 'welcome to Glasgow boys'. You have to love somewhere that they leave a traffic cone on the head of a statue over the weekend as 'there's no point in taking it off until Monday, they just put it back up there if we do' though don't you? Still the Kelvingrove Bandstand is a remarkable venue, and it was great to see the familiar faces of the Stranglers road crew as we arrived for our soundcheck. At showtime the rain had stopped, the sun was shining and all was right with the world - until Segs sang the words 'thunder and lightning' in 'Jah War' and the proverbial heavens opened. Poncey English people (like me!) ran for cover while every Scots person just carried on watching - as one chap put it to me afterwards, 'I was more worried about my beer getting watered down'. A great gig, and The Stranglers were pretty good too. Mind you, they usually are.
Homeward bound we changed trains at Crewe where we spotted a rainbow t-shirt-wearing  Cliff Richard boarding our London train. Within seconds we were all texting each other with unrepeatable variations of his hit single song titles. Well, we couldn't say them out loud…

hand, and playing at Caerphilly Castle is definitely among them. Possibly the most stunning venue I've ever been lucky enough to play in, our dressing room was up a seemingly endless stone spiral staircase - the word 'room' doesn't do it justice, it was a stone hall with, among other things, a tapestry of a hanging on one of the walls. And if that wasn't enough, The Tommy Cooper Walk Of Fame was across the road. Earlier we had a meal in the Volare Italian restaurant, where in addition to the magnificent food we were given complimentary limoncellos (being the heathen that I am I'd not had one before. I guess I need to get out more?) while fans came in off the street to ask for photographs with us. Our gig was even better than the previous week's show, with plenty of Ruts t-shirts in the crowd and smiling faces all round. Afterwards I went up onto the viewing area above the right hand side of the stage, where the unexpected excitement of audience members waving caused me to give what might best be described as a rather peculiar impression of The Pope. They went completely mad when Dave and Segs appeared. The Stranglers were excellent once again, but as I said last time, they usually are.

After the C.C. show we drove to The Britannia Hotel in Bromsgrove in an attempt to break the near-astronomical distance that we had to travel to the next gig. On arrival sometime around 2 a.m. we were sternly informed that breakfast didn't start until 8 a.m. - when we arrived at the allotted time it looked as though it had been open for ages and was packed out. First world problems eh? A few hours of fitful sleep in the bus followed (aided and abetted by Mott The Hoople and The Tom Robinson Band on the headphones) before we eventually arrived at the ferry port to Dunoon. Our journey across was enlivened no end by Segs's tales of his adventures sailing in the area, and when we arrived in Dunoon it was impossible not the think of The Wicker Man. Well, it was impossible for me not to think of it anyway. As we drove to The Queens Hall for our show as part of The Punk On The Peninsula Festival the picturesque tranquillity of the surrounding area contrasted with the assorted multi-coloured mohawks and punky t-shirts - when we arrived Fire Exit sounded good, Ian the promotor has provided a large bag of haggis-flavoured crisps (not for me thank you!) and Jennie from Rebellion and her pal Jo were cheery and friendly to all concerned. We played to an audience which sounded as though they'd been drinking all day or indeed all weekend - either that or they liked us (no one left as far as I could see) but they couldn't be bothered clapping. They treated The Cockney Rejects in much the same way, which I would imagine is something that their doctors wouldn't necessarily recommend - we missed the end of their set as we had to leave to catch the 10 o'clock ferry. This was a shame as we also just missed T.V. Smith who was arriving for his show the next morning, but it was still light and the bay and surrounding area looked absolutely amazing. From there it was back to Glasgow for much merriment and a bottle of red wine (or two) in Dave's room with Reservoir Dogs on in the background. At least that goes some way towards explaining this morning's headache.

So there you have it - four great shows. And we're looking forward to more next week when we play both electric and acoustic shows at The Rebellion Festival in Blackpool where I'll also be appearing with Alvin Gibbs and The Disobedient Servants among others. I will be attempting regular posts from the festival on my Facebook page, and if you're going I'll see y'all there... 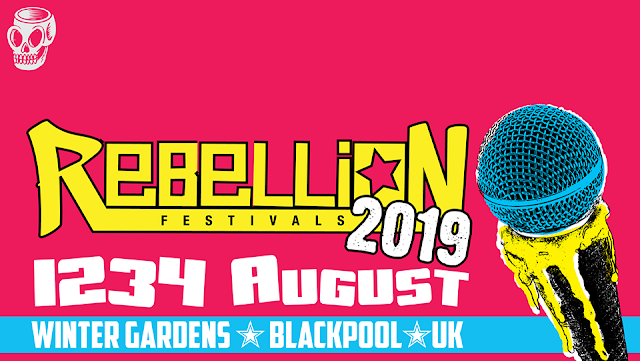 Posted by Leigh Heggarty at 9:19 am No comments: