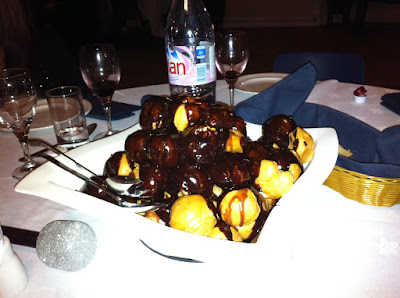 Another rock casualty - Michael Davis of The MC5 has died. Like The Stooges, The New York Dolls and The Velvet Underground the MC5 are a band that were derided when they first appeared in the 1960s but that were later held up as heroes by the punk rock fraternity in the 1970s. One listen to anything from 'Kick Out The Jams', 'Back In The U.S.A.' or 'High Time' will show why their radical politics and their association with the likes of John Sinclair meant that the American establishment marked them out as enemies at the time of their release. Their extraordinary combination of anger, frustration and intelligence make them some of the most remarkable rock records of all time, and Michael Davis made a hugely valuable contribution to them. Click here for an amazing clip of the band playing live in 1970 - that, my friends, is rock 'n' roll...
In the meantime it's been another gig-less weekend for your humble narrator, although I did spend Sunday with F.B.I. Band / Utter Madness keyboard maestro Richard Whennell recording guitars on two tracks for Glee Club UK. There wasn't a lot of rock 'n' roll rebellion in the tracks in question (since you've asked they were 'We Built This City' by Starship and 'You're The Inspiration' by Chicago) but it was still a hugely enjoyable experience, and a real challenge to attempt to recreate the guitar parts on the original recordings. I'm not sure that I was completely accurate but even though I say so myself it sounded pretty good by the end of the session. Let's hope it still does!
Thankfully I've got some gigs this coming weekend (thank Gawd!) so I can't sit here talking to you as I've got songs to learn - but in the meantime it's my Dad's 80th birthday today and I'm off to see him. I've considered writing a hopelessly over-emotional, intensely personal account of our relationship here in these hallowed pages, but have decided to just say that more than ever I realise that I wouldn't be the person that I am today (for better or worse!) if it wasn't for the way he and my Mum bought me (and indeed my brother Terry) up. They could be hard on us sometimes which at the time seemed difficult to understand but nowadays makes a lot more sense. He remains a tough man, albeit with a somewhat softer centre these days, which is no bad thing if you think about it.
I've bought him a framed Heggarty coat of arms - in doing so I've discovered that our family motto is 'they neither bend nor change'. That'll do for me, and I suspect it'll do for him too. Happy birthday Dad.
Posted by Leigh Heggarty at 10:39 am No comments:

I knew I should have kept a box of them under the bed... 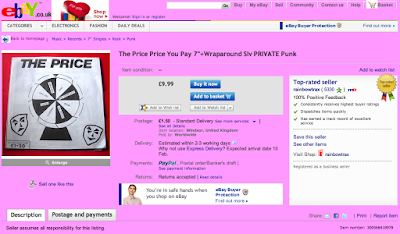 Now here's a funny thing - the first Price single for sale on eBay. Most of these were sold at gigs out of cardboard boxes, and incredibly it was made 'single of the week' in the NME although that was a bit of an inside job as the writer in question already knew of the band; his name was Steve Lamacq - I wonder what happened to him? It feels a bit strange to see it there - how naive does 'pay no more than £1.30' look now? - but it's nice to think that we haven't been totally forgotten. You can see the full listing here - and no, I don't have any spare copies!

Following on from Muhammad Ali's 70th birthday last month it was sad to hear of the death of his trainer Angelo Dundee. Boxing was very popular in our house when I was young (my brother Terry was a boxer and dad a big fan of the sport) and so I know his name very well - he was a great character as these quotes show Would Ali have made it without him? Now there's a question... and Witney Houston has died - I don't know much about her music as it's not really my type of thing but with the media gearing up for another paparazzi-powered feeding frenzy I'm sure we'll all have chance to find out far too much about her over the next few days and weeks.

Anyway, amazing news - I actually played two gigs this weekend. At last! Every musician I talk to seems to be suffering at the moment, and while I'm lucky enough to have gigs on the horizon these are definitely tough times for all and sundry. Still The Uppercut returned to The Half Moon in Harrow on Friday evening for a show that didn't start well - even before we'd played a note we were being asked to turn the volume down. Bah! Our first song 'Dock Of The Bay' was so quiet I could hear the unamplified strings of my guitar louder than the sound from my amp. Not good, and although we managed to sneak the volume up a bit later in the evening it put a bit of a dampener on proceedings. Under these circumstances I thought we played well but it was harder work than it should have been.
Sunday night I accompanied Big Al Reed at The Anglers Retreat in Staines; once again Barry the slide guitar player got up for a few blues numbers (and very good he was too) and Al was his usual larger-than-life self; his spontaneous Frank Spencer impression during 'Polk Salad Annie' induced audience hysteria and had to be heard to be believed. It was something of an experimental evening for the venue as it was the first Sunday gig - let's hope they decide to continue.

And last week I saw T. Rextasy at The Beck Theatre in Hayes. I got there early to meet up with ex-Chicago Blues Brothers drummer John Skelton who's been playing with T. Rextasy for several years now; it was good to catch up with him and great to see him doing so well with the band, whose 'Children Of The Revolution' tour celebrates 40 years since the release of 'The Slider' (How long? I remember saving up my milk round money to buy that when it came out!) as well as marking the 35th anniversary of Marc Bolan's death in September. This was only the second date of the tour - John said that they were due to play several songs for the first time at the show, having spent most of their soundcheck running through them. It all sounded good to me, with Danielz as mind-bogglingly like Bolan as ever, and the band sounding solid and strong. The audience loved it too, with plenty of dancing and even a fair bit of screaming from some of the ladies present. Despite playing in several tribute bands myself I still can't make my mind up about them, but for people like myself who didn't see the original band T. Rextasy deliver as faithful a rendition of Bolan's music as we're ever likely to witness. Great stuff - mind you, where was 'Buick MacKane', 'The Slider', 'Shock Rock'... (continued on page 94)

Posted by Leigh Heggarty at 9:18 pm No comments: 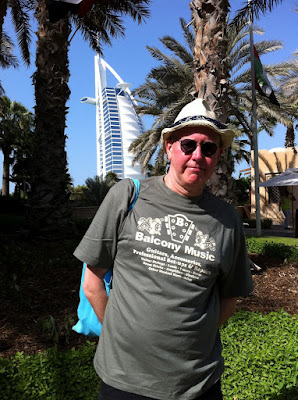