That Was The Year That Wasn't (Slight Return)

It has been exactly one year since my last blog posting.
So what, if anything, has changed?
Well...
Omicron. No, I'm not too good at the Greek Alphabet either - aside from the odd distant memory from Physics lessons sometime last Century it's not something I've used a lot, although I feel as though it's getting more useful all the time. As I type this I am in the grip of the latest Coronavirus variant - I've been asleep for much of the last few days and when I have been awake I've felt as though I've been in the ring with Mike Tyson in his prime, although thankfully things seem to be improving now. Christmas? Who needs it eh? Still vaccinations seem to be getting more popular these days, although we all know someone who hasn't had one because they don't like the idea of it or that think it's all a conspiracy - I've had two of 'em and and a booster and I still caught it, so it does make you wonder... that said, the general consensus seems to be that if you catch it after being vaccinated it does lessen the effect of the virus, which given how I've felt for the last few days is an interesting thought.
And the British Government continues to make every mistake imaginable and still somehow remain in power. Surely we deserve better than this? I saw Labour MP David Lammy talking on TV not so long ago - the interviewer made a typically flippant remark about a comment he made criticising the international embarrassment that is our current, worst ever Prime Minister and Lammy snapped back with the words 'THIS USED TO BE A SERIOUS COUNTRY - DO YOU REALISE WHAT PEOPLE THINK OF US NOW?'
Now there's a question.
Enough of such philosophical ramblings - I had my 60th birthday this year. 60! How on Earth did that happen?!? The Slogans were supposed to be playing on the day but our drummer man was pinged (remember the pingdemic? It seems a lifetime ago doesn't it?) so the gig didn't happen - instead I spent the evening in the hallowed surroundings of The Dolphin in Uxbridge, mostly in the garden, occasionally somewhere near the bar and had a splendid if rather difficult to remember time. I wonder where we'll all be in July this year? I wonder if we'll be anywhere, if you know what I mean?
And you thought that I'd stopped the philosophical ramblings...
Talking of The Slogans - we managed to play a few shows this year including one particularly memorable one at The Uxbridge Christmas Market earlier this month. Yes that's right, an outdoor show in December. And yes, it was as cold as you would think it would be, yes the power went on and off as you would expect it to and yes, it was really good fun. We've also had more than a few gigs cancelled, which seems to be a familiar tale for most bands these days. I've also been depping in The Good Old Boys as guitarist Simon hasn't been well - again we've played a few shows, had a few cancelled... see what I mean? One can only wonder when or indeed how this situation will change. 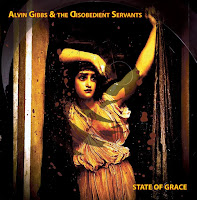 I mentioned in the last missive that I had recorded some guitar parts at home using GarageBand for an Alvin Gibbs & The Disobedient Servants single; this was due out early this year but somewhat inevitably got caught in a Brexit-induced vinyl pressing backlog and so didn't actually emerge until the Summer. Has anything actually improved as a result of Britain leaving the EU? No, I didn't think so either... nevertheless, 'State Of Grace' is available here from Time & Matter Records even as we speak. We only managed to play one show this year (at The HRH Punk Festival in Sheffield back in October since you were wondering) but it was a great gig at an excellent event - there are plans to return to both the studio and the stage next year, and hopefully we will. 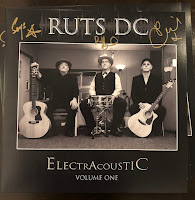 Vinyl copies of the 'ElectrAcoustiC' album by Ruts D.C. were also delayed thanks to the afore-mentioned backlog, eventually being delivered nearly a year after the CD became available. The Sunday before Christmas I played an afternoon show at The Cavern in Raynes Park with The Good Old Boys then made my way up to The 229 Club in Great Portland Street where Theatre Of Hate were playing; there I met Dave and Segs backstage (the things I write here eh? Well, the things I used to write here... I really must do this more often mustn't I?) and signed over 300 albums, all of which had either been pre-ordered or were purchased in the next couple of days. A genuinely exciting day - it would be good to have more like that... mind you, I suppose that might have caught Coronavirus then... ooh!
So - what next? 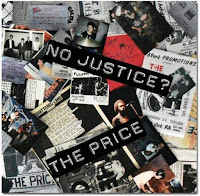 Well in a time that could politely be described as 'uncertain' one thing that even I could never have predicted is actually going to happen - nearly 30 years after we first broke up there is to be an official album release by The Price, something that we didn't manage to achieve during our original existence. Even typing it here feels weird... but, incredibly, it's true. 'No Justice?' is out early next year on Cadiz Music - to quote the soon-to-appear press release it contains 19 tracks recorded between 1988 and 1993, and even though I say so myself it sounds bloomin' great. More news to follow on the band's Facebook page via the link above, my Facebook page and no doubt some other places too... maybe even here...
Theoretically Ruts D.C. are supporting The Stranglers in January and February - this is the third attempt at The Final Full U.K. Tour, and with further restrictions looming as I type this it's difficult to say whether it will take place this time either. We have German shows planned for later in the year, along with various others in the pipeline, and we'd also like to make a new album - but who knows what will happen? It's interesting isn't it - we've never really known what will happen in life, but these days it almost feels as though we did. If I put something like 'we're touring with The Stranglers' here then the chances were very good that we that we would indeed tour with The Stranglers. Those days seem a very long time ago now don't they?
Hmm. Even I thought that I'd stopped the philosophical ramblings... mind you, it's been good to be back blogging, even if I am running on paracetamol and, well, not much else at the moment.
See you all in 2022!
Posted by Leigh Heggarty at 3:20 pm No comments: