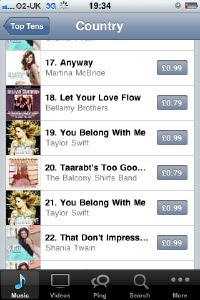 And the madness continues - we've now had over 15 thousand YouTube hits, and have peaked (so far!) at number 20 in the iTunes country music charts. Amazing, not least because it means that your humble narrator can say that he's played on a top 20 single. Look, there we are above Shania Twain and Taylor Swift; in fact we're the filling in a Taylor Swift sandwich. Now there's a thought... there's going to be a piece about us in the local paper this week, and Thursday morning saw unashamed posing from the entire Balcony Shirts crew when a photographer from said journal came to the shop. His appearance coincided with a visit from Dave the John Hornby Skewes rep who found the whole thing highly amusing - maybe he doesn't visit too many shops who design custom clothing whilst participating in a photo session?
It was a splendid evening on Friday when Tropic At Ruislip hosted a double bill of The Pistols and The Clashed. It was a much punkier bill than the usual Tropic fare, and a successful one with the best part of 200 people attending. Although I've depped in The Pistols I'd never actually seen them play, and they do a fine job in recreating the filth and the fury of Johnny and the boys. Singer Paul distinguished himself by wearing a tweed suit (cue butter gags!) and Colin the guitarist wielded a Steve Jones signature model Les Paul to great effect. Tim and Toby gave the bass and drums their all and although I could personally have done without the 'Great Rock 'n' Swindle' material (they missed out 'Did You No Wrong' but they played 'No One Is Innocent' - bah!) the 'NMTB' material sounded as mighty as ever. The Clashed were enjoyable enough although they were somewhat hampered (visually at least) by having a Mick and Joe mix up i.e. the rhythm guitarist sang like Jones and the lead guitarist sang like Strummer. They also had a bass player who looked about 12 although I think he was a stand-in. Sound wise they were authentic enough to get more than a few audience members bellowing along, and I'm sure I wasn't the only person there who felt the hairs on the back of their neck stand up as '(White Man) In Hammersmith Palais' began. And let's face it, any band who does 'Straight To Hell' as an encore can't be all bad can they? I'd probably have enjoyed them more if I hadn't developed hiccups a few songs into their set, a situation which sadly continued for much of the evening and gave me spurious justification for drinking far too much lager; it didn't stop the hiccups and it cost me a fortune!
And it was a good gig last night too - the (ahem) debut 'proper' (as opposed to 'impromptu-get-together-at-a-charity-night') performance of The Rikardo Brothers at The Load of Hay. Following on from our rehearsal on Tuesday Alan (vocals) had put together 2 sets, both of which he largely ignored all evening putting myself and Pete (guitar) on the spot with a few 'do you fancy a go at this one?' moments. Then again nobody in the audience seemed too concerned and overall it was a good first show although we all agreed that in a weird sort of way it's easier to play a unrehearsed gig like we did last time than it is to present a 'serious' show. Maybe there's less pressure if it's all spontaneous? Well, there's a question that could be profitably pondered... maybe I'll ponder it further one day...
Posted by Leigh Heggarty at 10:46 am No comments:

So there we are then - we've had over 12,000 viewings of the Balcony Shirts song for Queens Park Rangers on YouTube and are in the top 30 country music downloads on iTunes as I type this, as well as getting a revue in no lesser publication than The Guardian! We'll be playing it live on the centre spot before for the first home game of next season at this rate!
Your humble narrator wasn't expecting to have any gigs over the weekend just gone, and so was readying himself for another episode of the all-too-sporadic 'Vinyl Rules!' column as I'd have time to transfer some more records over to digital format - however sometime on Wednesday I was asked by the long-suffering Shirley if I would like to contribute to a charity evening that she's involved in at The Battle Of Britain Club in Uxbridge on Friday. 'They're having a 'Britain's Got Talent' theme and Nick the organiser wondered if you'd like to do some solo guitar in the interval, maybe 10 minutes or so?'
What I should of course have said is something like 'I haven't really got time to get anything together at such short notice' - you and I both know I didn't say anything of the sort...
With Voltarol's radio show playing in the background (he played a 'Tommy' medley by Victor Biglione for me as well as mentioning this blog! Thanks Mr. V.!!) I re-strung my acoustic guitar and wondered just what I'd let myself in for. Solo acoustic guitar pieces are generally not very long - well the ones that I can play aren't anyway! - so I'd need five or so to manage the allotted time. Well there's the stuff that I played a Dave's funeral last week, and there's an Ike Isaacs piece called 'Just Funky' that I had a go at ages ago and might be able to remember, and I've been looking at 'Some Summer Day' by John Fahey, and there's that little idea of mine that I've been working on, and I've always fancied a go at 'Bron Yr Aur' by Jimmy Page... that should be enough shouldn't it?
As it turned out it was more than enough. I would estimate that 95% of my audience were young bank employees (Nick is a bank manager) unlikely to be interested in the likes of Isaacs and Fahey (I didn't bother playing either of their pieces - oh well, maybe next time?) even if they hadn't been queuing for their meals. Up until that point in proceedings they'd been entertained by 5 acts in 'Heathrow's Got Talent', although a better description of things might be 'watched some of their workmates make idiots of themselves and watch some others be surprisingly good at singing / dancing / comedy etc'. That said there were a few people listening, and a mention of Mr. Page got a beery cheer from the darkness to my left; I was just about to start said tune when a large gentleman came up to me repeating a car number plate several times in my general direction then demanding that I tell the driver to move it immediately. I referred him to the D.J.... I left the stage to what I thought was total indifference and thinking something along the lines of 'huh - I've been ignored by bigger and better audiences than this lot'; however quite a few people came over to say that they'd enjoyed it, and the long-suffering Shirley (who by now had been given the job of distributing the aforementioned food!) said that plenty of people had been listening. From my point of view I was relieved that I hadn't been as nervous as I'd been at Dave's funeral, and I played quite well although I feel there's still a long way for me to go before I (ahem!) launch my solo career - if indeed I ever do!
After the show Shirley and myself made the short journey to The Gardeners Arms to catch an hour or so of the Ace! club night, and very good it was too. Scott from Balcony Shirts basked in the glory of The Guardian piece, Shirley's brother Trevor introduced us to what felt like everyone in the place (he's a regular there, fairly obviously) and every record that was played was a classic. A good first night for Darren and Simon - let's hope there are many more to come.
In the meantime it's been very busy in the shop - maybe thanks to the song, maybe not? - and there is more acoustic guitar playing on the horizon this week. Following on from our impromptu performance last month I'm teaming up with Alan and Pete from The Good Old Boys for a performance at - you've guessed it! - The Load Of Hay next Sunday. Now officially christened The Rikardo Brothers (don't ask me, I only work here etc) we're rehearsing this evening- not entirely sure sure what material yet, but it should be fun...
Posted by Leigh Heggarty at 12:39 pm No comments: 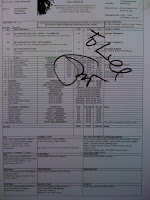 My brother has been working at Shepperton Studios, which as you may know was once owned by The Who and features several sound stages where successful (i.e. those that can afford it) bands rehearse for upcoming gigs and tours. Terry held the door open for a young up and coming Surrey guitarist from one such band the other day; he (maybe that should be He?) was kind enough to sign an old call sheet which Terry had handy. I'm going to the Royal Albert Hall next month to see said guitarist - I'm sure it'll be a good night, I believe he's played there quite a few times before...

Talking of good nights, this Friday sees an event that's well worth supporting, a club night at the somewhat unlikely venue of The Gardeners Arms in Uxbridge - as the poster says, ACE! promises '60's soul ska and beat which is more than enough to tempt your humble narrator through the door. I remember D.J.'s Simon and Darren when they were lads back in the '90's, they've just started the excellent What's On In Uxbridge website which means that at last there is somewhere for bands and venues to tell people that there's something happening locally. Let's hope both the club and the website are successful for them.

Meanwhile the latest Balcony Shirts song has been unleashed onto You Tube - Chris and Scott are both lifelong fans of Queens Park Rangers, and from early on this season decided that if Rangers were promoted to the Premier League they would write a song that included the name of every member of the current first team squad. They've done a fine job, as you can discover if you click here - I'm on lead guitar, which Scott invited me to contribute with the words 'play like Neil Young'. I'm not sure I managed it, although he has since compared my contribution to 'Motorcycle Emptiness' by The Manic Street Preachers. This is high praise in my world (I wouldn't have been telling you that he'd said it if it wasn't!) and I'm not sure that I managed that either, but see what you think. There are also some suitably euphoric t-shirts available that come with a free CD of the song, and the song itself is now available on iTunes. Pretty cool huh?
Chris went to the last game of the season where he met fellow season ticket holder Mick Jones; apparently they play 'London Calling' when he takes his seat at home games. Excellent! Hmm... I wonder if I can get them to play a Price single next time I'm at a Liverpool game?!?
Posted by Leigh Heggarty at 3:00 pm No comments:

Funeral for a friend