Had me a real good time

I saw The Faces last night!
Well, to be precise I saw 3 of them- Kenney Jones, Ian McLagan and Ronnie Wood- who with Bill Wyman on bass played 3 songs at The Royal Albert Hall at the climax of an evening in aid of The Performing Rights Society For Music Members Benevolent Fund. With their former lead vocalist unavailable Paul Carrick sang 'Cindy Incidentally', Andy Fairweather Low sang 'Ooh La La' and Mick Hucknall sang 'Stay With Me'. For a fan like myself it was a great thing to see as in their original incarnation they'd broken up long before I started venturing out to see bands, and it had been a pretty good night all round- fine performances from artists as diverse as jazz guitar hero Martin Taylor and former Spice Girl Melanie C. and with a hilarious performance by Rick Wakeman ('Eleanor Rigby' in the style of Sergei Prokofiev!) being a rather unlikely, not to mention surreal, highlight. But in the end it was all about The Faces and their gloriously ramshackle rock'n'roll riot- they're one of my favourite bands ever, and it was fabulous to finally see something approaching a reunion. Excellent!
Posted by Leigh Heggarty at 4:03 pm No comments:

'How many fingers am I holding up?'

And talking of Dr. Feelgood- I saw 'Oil City Confidential' at The I.C.A. in London last night. Directed by Julien Temple and with some extraordinary live footage amid interviews with all the main players, it's a fantastic film for a fan like me and a pretty good one even if you're not, mainly because of Wilko Johnson's extraordinary onscreen antics- talking after the film Temple suggested that a petition is started to get Wilko to present 'The Sky At Night' when/if Patrick Moore ever retires; suffice to say that it's one petition that we should all sign...
Posted by Leigh Heggarty at 11:43 am 1 comment: 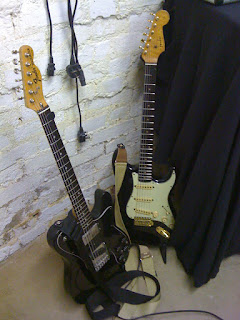 Yesterday saw The Flying Squad visit Roundel Studios in Kent to record 3 songs under the auspices of Roger Cotton. A fine time was had by all, and the results should be available on CD at the band's next gig- we're supporting punk legends The Vibrators (really!) in Chislehurst next month and details can be found here...

In case you were wondering, the 3 songs recorded are the Dr. Feelgood / Wilko Johnson classic 'She Does It Right', 'That's It, I Quit' (a Nick Lowe song also recorded by The Feelgoods) and 'Police Car' by Larry Wallis which I remember buying all those years ago on Stiff Records and which I heard again earlier this year on one of those free CD's that come with magazines these days; back in March we were on our way home from a gig in the early hours of the morning and Brian the driver and myself were listening to said CD when 'Police Car' came on- about 20 seconds into it we both said 'what a great song, someone should do a new version of this'. So we have! (And here is a great clip of Mr. Wallis himself playing it...)

It's been a while since I was last in a recording studio, and I'd forgotten how much I enjoy it. Time to record that album that The Price should have recorded all those years ago then?!? Excellent!
Posted by Leigh Heggarty at 12:35 pm No comments:

Bloody hell I'm tired. And I think I'm getting a cold. Not good, frankly.
I've just (just!) got in from today's re-stringing session at the theatre with Stuart the guitar repairman, which included a visit to The Jersey Boys where your humble narrator got to re-string a Jerry Jones Baby Sitar. Now there's something you don't get to do everyday! Well, I don't anyway... we also dropped a guitar off at Avenue Q (Stu had repaired it for noted guitarist Andy Jones) before stumbling home, or in Stu's case off to the pub. (Good man!) But today's not the reason that I'm so tired...
Yesterday saw the first Chicago Blues Brothers theatre date since the end of August, and it's a great one to come back with- at The Lyric Theatre in Manchester which is part of The Lowry Centre on Salford Quays. Myself, Richard (saxophone) and Tracy (vocals) made the journey North without too many problems, and arrived to find Old Trafford quiet, which was something of a relief since the venue is very close to the football ground and if there'd been a match on we might never have got to the theatre! Sadly there wasn't time for a visit to Lou Macari's Fish and Chip Shop (now there's a name for older football fans to conjure with) as we were running a bit late- we arrived to find everybody else ready to soundcheck. It's an A-team gig- Matt and Mike as Jake and Elwood, Ian on keyboards, Squirrel and Marc on bass and drums and Dave on trumpet, with Pete on hand to direct operations as well as making a couple of cameo appearances (more about that later) and his wife Jayne on costume control. Phil's behind the mixing desk, and he's not having a very good day- there are problems with the monitors which will take a while to sort out so we leave him to it for a while and have a look around. The Lowry Centre is a very impressive place- sadly there wasn't time for a look in the Gallery (although it's amazing how many people say things like 'anybody can paint like that' when the name Lowry is mentioned) which was a shame... it was also rather a shame that in my haste to extract my phone from my pocket to answer it I dropped it on the stone floor and cracked the front. Bugger! I didn't have the money to buy a case for it when I got it, but I definitely should have got one in the meantime. Oh well- another lesson learned?
Back on stage it turns out that one of the amplifiers isn't working so I haven't got a monitor which makes hearing Ian's keyboards a bit tricky- we turn them up in Squirrel's monitor which isn't to far away from me. There's not much time left to sort things out as the door's are opening soon as there are over 1,000 people coming to see us...
Back in dressing room 21 there's a visitor, and it's someone that none of us have seen for a while- Dave Finnegan. It was great to see him again after several years of not being in contact (myself and various other band members were members of Dave Finnegan's Commitments- Dave played Mickah Wallace in the film) and he was on fine form. And the band was on pretty good form too as we played a great show especially considering that we've not played together much lately. (In the dressing room afterwards Ian commented that he'd forgotten a couple of things; Marc said that it didn't sound as though he'd forgotten any of the good bits...) Talking of forgetting things Pete had forgotten has stage trousers meaning that he made his appearance as the preacher Rev. I.C. Delight in jeans (I thought it looked alright!) and the back projections that we first used in Worcester back in August looked even more amazing this time. An excellent gig- it's good to be back in show business!
It's a long haul home 'though, with Richard doing a fine job behind the wheel and your humble narrator drifting in and out of consciousness on several occasions; at one point I came round to hear an extraordinary version of 'Wild Horses' on the radio- all 3 of us were astounded when the DJ said that it was the new single by Susan Boyle- you know, the woman off of that TV show? I'd never heard her sing before, but judging by this recording she certainly has an amazing voice.
Tracy was asleep in the car when I made Richard a cup of coffee at some time after 3 a.m.- we both agreed that it had been a great night, and that it was going to be a long day today. Judging by how I feel at the moment, we were both correct...
Posted by Leigh Heggarty at 3:46 pm No comments:

I remember seeing Mott The Hoople on Top Of The Pops in their mid-'70's heyday- I liked the music and I always thought that they looked... cocky if you know what I mean. I thought they were great. And I remember looking at the cover of their album 'The Hoople' for ages one day in a shop in Uxbridge trying to decide whether or not I could afford to buy it or not, after all I liked the singles but didn't know all the other tracks on it and what if it's terrible and I don't like it, 'though I liked the cover but you can't buy an album just because it looks nice can you? After all they're expensive compared to singles, and anyway there's a new T.Rex album out and if I'm going to buy anything it should really be that one shouldn't it? Oh I don't know- if only I could get them both, and all the other albums that I've been looking at today...
Nothing's changed- I still spend ages in record shops (when I can find them!) wondering what I can afford to buy. Isn't there a saying, something like 'show me the boy and I'll show you the man'?
They'd finished long before I'd started going to gigs so I didn't get chance to see them although when I was in The Flame we supported Ian Hunter one memorable night in the mid-'90's; they've just reformed for 5 shows at The Hammersmith Apollo (it's the Hammersmith Odeon!) where I saw them play last night, and very good they were too. In the entrance hall before the show familiar faces were everywhere- Bobby Gillespie, Paul Simonon, legendary Mott fan Mick Jones, all testament to the band's influence on subsequent rock musicians, and the air was heavy with anticipation. Original drummer Dale Griffin was reportedly too ill to play (although he came out for the encores,) but with Martin Chambers behind the kit they looked as cocky as ever and sounded a lot better than many thought they had any right to. The older album tracks kept the audience waiting for the singles for over an hour before Hunter sat at the keyboards and led the way into 'The Golden Age Of Rock'n'Roll', 'Honaloochie Boogie' and 'All The Way From Memphis'- judging by the reaction all were well worth waiting for- with encores of 'Roll Away The Stone' and the inevitable 'All The Young Dudes' (a rumoured appearance by David Bowie didn't happen sadly) upped the hysteria level before 'Saturday's Gigs' sent us all home happy. A fine show.
Posted by Leigh Heggarty at 9:34 am No comments:

Down on the farm