Wipe the windscreen, wipe your nose... 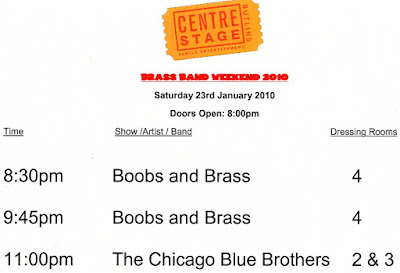 As your humble narrator stumbled his world-weary way through the white double doors that led to the backstage area of Centre Stage at Butlins in Skegness while carrying 2 guitars and a case of leads (why do the bloody things always open outwards?) his bleary eyes focused on the above sign - some things just have to be reproduced in these hallowed pages and this, my friends, was definitely one of them...
A show at a brass band weekend might seem an unlikely first gig of 2010 for The Chicago Blues Brothers but it turned out to be a highly enjoyable start to this year's (and indeed this decade's) campaign. A 'mostly-A-Team' line-up (Squirrel on bass, Marc on drums, Richard on Saxophone and myself) was joined by Steve on trumpet (he books the entertainment at the camp) and Steve (hope this isn't getting too confusing!) on keyboards (he's the resident keyboardist) with Pete making yet another comeback to show business as Jake next to Mike as Elwood; sad to say I didn't see much of Boobs And Brass but they sounded very good to me (then again my knowledge of all-female brass bands is limited to say the least!) although they did have the obligatory 'big-bloke-dressed-as-a-woman' (you just KNEW that they would didn't you?!?) who terrified everyone backstage before terrifying everyone in the audience. 'Tits And Trumpets' are on next' said Mike as their show drew to a close. Sadly he was wrong!
With the curtains drawn and the stage clear it's our turn to set up- amplifiers were provided by the venue and for Squirrel and myself it was our first chance to hear how they sound. His Ashdown bass gear sounded excellent, my Marshall MG50 combo sounded a bit 'rock' for what we do but not too bad all the same. Marc had been befriended by Louis who'd been working backstage and was now playing tambourine and bongoes with us (strange but true!) and the stage crew worked hard to give us what we wanted in our monitors. After our first number there were already quite a few people on the dancefloor (I spotted one guy in a 'Sex Panther' t-shirt- hope he got it from Balcony Shirts!) and the stage invasion during 'Mustang Sally' was enough to send the security staff into a health-and-safety-powered frenzy. A good start to our year.
And it was a good night on Friday when myself and Price bassman Huggy went to The 100 Club to see Eddie And The Hot Rods supported by The Radio Stars. Huggy decided to drive us up there, a somewhat controversial plan (have you ever tried to park in the Oxford Street area?!?) which was almost immediately thwarted when the windscreen wipers on his van stopped working, preferring instead to make a worrying vibrating noise. 'This is a new one on me' said Huggy as he considered the situation; he carefully selected a spanner which he proceeded to hit the offending items with, an action which incredibly did nothing to solve the problem. Plan B was hatched almost immediately- get a tube train instead. An eventful drive to West Ruislip Station followed with your humble narrator having to get out ever couple of hundred yards or so to manually move the wipers across the windscreen. (I'm not making this up honest! I'm not sure that I could make this up!!)
We spent most of the (thankfully uneventful) train journey into town discussing ideas for upcoming '25 years of The Price' celebrations (official announcement coming shortly- watch this space!) before arriving at The 100 Club just as The Radio Stars took to the stage. They were good if a little loose in places- I don't think they were exactly over-rehearsed- but 'Nervous Wreck' sounded as good as I remember it sounding and they went down well with the rapidly arriving audience. Just as their last song ended I developed a nosebleed which was no reflection of their performance but was suitably punky if you think about it.
Opening with 'I Might Be Lying' (I remember buying the single when it came out- fantastic!) The Hot Rods delivered a blistering set which caused a near riot more-or-less from the word go. Highlights were many but I must mention a wondrous version of 'The Power And The Glory' alongside the inevitable 'Do Anything You Wanna Do', and the encores of 'Gloria' and 'Get Out Of Denver' sounded every bit as energetic as the recordings from the 'Live At The Marquee' EP (I bought that when it came out too!) A brilliant gig which sent myself and Huggy on our way back to the Central Line in such a state of euphoric inspiration that we all but forgot about the windscreen wiper problem that awaited us...