Not a bad day (or three) 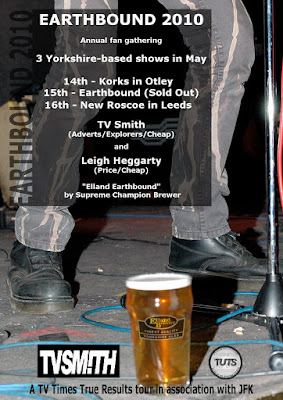 Please could you fix it for me to play 3 gigs in Yorkshire with T.V. Smith.

If possible could one of them be in a brewery.

Thank you very much

In the small hours of this morning myself and the long-suffering Shirley returned from 3 days in Yorkshire - as far as I know Jim didn't fix it for me even if he did turn up at the first venue; he didn't come to the gig, he just sat in the restaurant looking miserable. Ah well, he missed a great night, in fact 3 great nights of EARTHBOUND, the annual gathering of TUTS (T.V. Smith's United Tour Supporters - I think that's the correct wording, I'm sure one of them will correct me if I'm wrong!)

Friday is not always a good day to be travelling on motorways - it can be really busy! - but our journey was pretty straightforward until an hour or so from Otley when our sat. nav. stopped working; we pulled into a service station and asked a nearby driver if we could try it in his car to see if we could work out what had gone wrong, and decided that the power cable was faulty as it wouldn't work in his car either. With no appropriate lead on sale in the service station shops we resolved to get one on Saturday and made the rest of the journey using the sat. nav on my iPhone and a rather curious papery thing called a 'map'... Dowgill House turned out to be an excellent bed and breakfast establishment on the same road as the venue (hurrah!) so after checking in we walked down to Korks at the allotted meeting time of 6.30 to find several TUTS (many of whom had come over from Germany for the event) already getting settled in. T.V. arrived with Tim (a.k.a. T.J. who organised much of the weekend as well as booking us some splendid accommodation - thanks mate!) and we set up and soundchecked without too many problems. We'd rehearsed up a fair bit of obscure material for the gigs (and T.V. had also prepared some new solo stuff - after all it is a fan gathering and they deserve to hear some different songs don't you think?) but only played the more obvious stuff at the soundcheck to keep the set a surprise to any TUTS with good hearing in the other bar!
The venue is in the back room of a clearly well-thought-of restaurant, and seems to be a thriving folk club on Thursday nights as well as booking the likes of Mike Peters and Ian McNabb on Fridays. There's a fair sized crowd in by the time T.V. goes on for his first (solo) set which goes down well and ends with T.J. joining him on vocals for 'Make Your Escape'. After a short beer break we kick off with 'No Time To Be 21' - I don't mind admitting that I felt quite nervous before we started as there were people in the audience that knew the songs better than I did (!) but after a few songs I felt a bit better about things. Our set was mostly songs we'd played together before and ended with the 'Adverts trilogy' of 'Gary Gilmore's Eyes', 'Bored Teenagers' and 'One Chord Wonders'; T.V. encores with 'March Of The Giants' (as requested by an audience member) then we play 'Good Times Are Back' to finish a good first-gig-of-three.

A sunny Saturday began with a big breakfast (lots of nice comments about last night's gig from the TUTS staying in the guest house - that's a relief!) before we packed the car and spent an hour or so wandering around Otley - I was pleased to discover that there's a fish and chip shop called Chip-In-Dales (you don't believe me? Click here! Excellent!) 'though Shirley found the market rather more interesting. From there it was a 40-odd minute drive (Shirl fixed the sat. nav. lead - get a grown-up to help you next time Leigh!) to the Elm Crest Hotel in Huddersfield to check in and to watch some of The Cup Final. Having been forewarned that there would be little if any food at the venue (lots to drink 'though!) we went to the local Co-Op to pick up some supplies (it's all glamour this rock'n'roll lark I can tell you!) before making our way across to The Elland Brewery, scene of the evening's festivities. Part-owned by T.J.'s mate Smit it's definitely is one of the more unusual venues that your humble narrator has ever found himself in; we were playing in the main brewing area alongside the vats where the beer is brewed and soundcheck wasn't quite as straightforward this time, lots of feedback 'though we got it sounding ok in the end. It's an 'invite-only' show and with all the TUTS present and correct the live music begins with Sam and Dean playing some eclectic cover versions ('Living Next Door To Alice' goes down particularly well!) before T.J. introduces T.V. who plays a set of both new and obscure songs kicking off with 'Earthbound' (appropriately enough) and including quite a few from his new 'Sparkle In The Mud' collection of '70's and '80's demo recordings. I'd not heard the new songs before - 'Complaints Department' stood out as being very different for him, almost reminicent of John Otway! Then it's time for me to join him - continuing the theme of the evening we play rarely heard songs from his back catalogue (including this one) before surprising everybody with a brand new song 'Man Down', the cognoscenti show their approval by doing the conga to 'Runaway Train Driver' (I'm not making this up - click here to see what happened in 2004!) and several join us on the mics for 'Good Times Are Back' which finishes our set to riotous applause. T.V. returns to play another new song 'Dawning Of False Hopes' solo although he surprises everyone (including me!) be calling me up to finish it with him, I don't know the song but play a few notes here and there as I attempt to work out the chord sequence. He tries to finish the set there but the TUTS are having none of that so he returns to play a wonderful version of 'Generation Y'. A great gig. I must have shook hands with virtually everyone in the place and when Shirley and myself eventually leave it's to a chant of 'Leigh-Leigh-Leigh' - now there's something that's never happened before! If I can get a recording of it I might use it as a ringtone!

Sunday started with another big breakfast amid more praise from the TUTS (I could get used to this!) many of whom seemed more than a little worse for wear... we gave T.V. a lift into Leeds where Shirley enthusiastically attacked the shopping centre before making our way to The New Roscoe. We're playing everything we know as a duo - 23 songs! - and T.V. came up with the idea of playing them chronologically which made for a very interesting set 'though we saved the afore-mentioned 'Adverts trilogy' until the end. With everything sounding good we retired to the bar - Shirley's on merchandise duty for the third time (she's getting really good at it!) and with the last of the special 'Earthbound' t-shirts (guess who made them?!?) alongside T.V.'s CD's and books on the table we're ready for the gig. A healthy crowd (including CBB-er Matt with his wife Rowena) saw what for me was the best show of the three. It's hard to pick a highlight but I remember thinking 'this just might be the best song that I've ever played' during 'Borderline' then looked out to see the audiences faces, all captivated by what just might be the best song I've ever played... I made a mistake during 'Runaway Train Driver' - T.V. careered across the stage grinning, shouted 'I know what you just did- and I don't care!' in my ear before just making it back to the microphone in time for the next line, an incident which somehow sums up the spirit of the performance. Afterwards I say thank you's and goodbye's to friends old and new - Klaus, Fleagle and Mrs. Fleagle, Wolfgang, Gabumon (archivist extraordinaire!) and many many more, all agreeing to keep in touch, to meet at gigs, all wishing that the weekend could somehow last forever. It's hard to put into words how I or indeed Shirley felt about our time with the TUTS - suffice to say it's one of the best weekend's work I've ever been part of, although I'm not sure 'work' is the right word to describe something that was so much fun. As we arrived home at nearly 5 a.m. we were both very tired but had just been part of something that we wouldn't have missed for the world. Same time next year? I hope so.
Posted by Leigh Heggarty at 7:10 pm