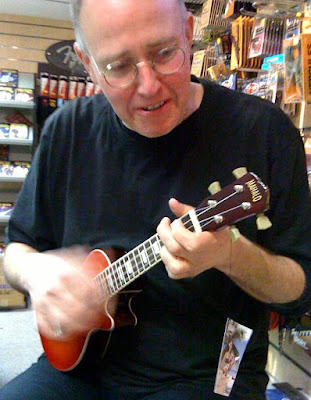 Behold this study of your humble narrator taken earlier this month in the hallowed confines of Pro Music International in Ickenham. If you're thinking 'it looks like he's playing an electric ukulele shaped like a Gibson Les Paul' then you're absolutely correct- American Tom took this picture of me on his phone when I was playing that well-known Christmas classic 'White Riot' (well, I got the first word right!) to the general bemusement of all concerned.
It's been a busy few weeks in the shop as you might well imagine- if there is a credit crunch then it doesn't seem to have affected everybody! The last 2 weeks have been particularly chaotic with deliveries arriving as late as 5 o'clock some days and the phone line approaching meltdown on several occasions. Then again Paul the guv'nor took us all out for a curry on Sunday evening (top man!) and we were in the pub by 5 o'clock today (just as well as it closed at 5.30!) so it hasn't been all hard work!
In the midst of all this madness (and with my ears just about recovering from The Who gigs earlier in the week) Friday saw the last Chicago Blues Brothers theatre show for this year, at The Lighthouse in Kettering. An unusually clear M1 meant that everyone arrived on time or even early which doesn't happen too often (!) but it gave us chance for a soundcheck/rehearsal with Matt and McGoo who were doing their first show with us- Matt did the Alnwick show last month with Mario, and he used to do the Blues Brothers West End show with McGoo several years ago. The theatre's part of the Kettering Conference Centre and has only been open since June- with Dave and Richard doing a fish and chips run myself and Squirrel set up the merchandise (we've got some this time!) in the foyer and with people queuing up to buy things before we've got everything on display it's set to be a good show. Roger (keyboards) and Chris (drums) are doing their 3rd show with us in the space of a week and they've got things well under control, and with Matt and McGoo at the helm it's an energetic performance with everyone in top form with the only glitch occurring when Sam the soundman played the second half intro voiceover earlier than we were expecting causing a somewhat panicky race to the stage with shirts being buttoned up on the way. We got there just as the audience were getting restless! The journey home was enlivened no end by hearing The Gene Drayton Unit's tremendous version of 'Geno' on The Mark Lamaar Show- I've not heard of the band before so I've got to check them out- and an extraordinary version of 'God Rest Ye Merry Gentlemen' by Hammond organ hero Jimmy Smith from his 'Christmas '64' album, which I managed to find on Amazon before I left for the shop Saturday morning. Well I hope I did- I wasn't exactly awake so I could have ordered almost anything!

Now it's 2 days off (thank God!) before a return to shop duty on Saturday- Happy Christmas to you and yours, see you on the other side...
Posted by Leigh Heggarty at 9:10 pm