'Swiss time was running out, it seemed that we would lose the race...' 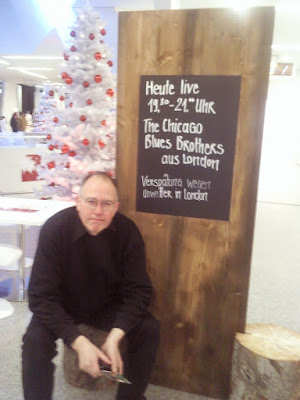 This photo of your humble narrator was taken sometime around 10 o'clock on Saturday evening. I'm in the recently-opened Westside Shopping Centre in Bern, Switzerland where The Chicago Blues Brothers and their band have just played a storming set in front of an almost impossibly enthusiastic audience. If you're thinking to yourself that the photo looks a little blurred then you're not wrong- but it's actually me that looks blurred, not the photo. Here's why...

It's just after 7.15 a.m. on Saturday morning and Richard, Dave, Tracy and myself are arriving at London City Airport. It's cold and a bit foggy, especially over the water, and the taller buildings disappear into the ether a bit more than I remember them doing the last time I was here. Squirrel and Pete are waiting for us on the airport concourse where we check in for the 8.25 a.m. flight to Zurich- Pete ruefully observes that it's 'already been delayed to 8.50'- then join Marc, Chris and Mike for breakfast in the departure lounge. The mood is good- spirits are almost as high as the prices of the food- until the nearby screen suddenly flickers into life to announce that pretty much all of the scheduled outgoing flights have been cancelled, and to show where the incoming flights are being diverted to. Pete goes off to find out what's happening, then returns with the news that we've all got to go back down to the check-in area to book onto another flight. Amid the ensuing chaos comes the news that, you've guessed it, low cloud is to blame. While we're in the check-in queue our luggage re-appears (including the guitar and bass- phew!) around the same time that we receive the news that our flight will be leaving from Heathrow- yes, Heathrow- at an as-yet-unspecified time in the afternoon, and that a bus to take us there will be leaving at 10.30 sharp; with just over an hour to wait we retired to Coffee Corner to ponder the ironies of life.
On the bus I'm seated next to a distinguished gentleman who, in the course of our conversation reveals himself to be a dealer and collector of rare books; when I told him I was in a band he rather angrily asked me if our singers were black- I expect he's got a first edition copy of 'Mein Kampf' somewhere at home... some 5 hours after checking in at City Airport we checked in at Heathrow, after which Squirrel and myself were dispatched to Gate X with our guitars before meeting the rest of the troops in the departure area. We took off not long after 3 o'clock on a flight due to arrive in Zurich around 5 o'clock local time (they're an hour ahead of us) which under normal circumstances wouldn't necessarily be a huge problem- except that we're due to be onstage in Bern, around an hour's drive from the airport, at 5 p.m...
At Zurich Airport we meet up with Ronnie the promoter and Marcel the driver; Pete, Mike and Tracy go in Ronnie's car with the rest of us going with Marcel in his people carrier. As we hurtle towards Bern Marcel reveals his taste in driving music- 'Machine Gun' by Jimi Hendrix, 'Psycho Killer' by The Talking Heads, the German language version of 'Games Without Frontiers' by Peter Gabriel- well, I was happy!
We arrive at the recently-opened Westside Shopping Centre just after half past six. It might seem odd to us for a band to play in a shopping centre (it certainly seemed odd to me when I first heard that we were doing it) but I'm told that this type of thing happens over in Europe all the time. Excellent! The stage is all set- well it would be if you think about it!- and I've got a Fender Twin Reverb combo to play through, a bit loud but sounding great to me. We get changed, check our gear and start with 'Peter Gunn'; there's a few hundred people watching with more arriving all the time, as the set progresses they start getting into it, dancing, singing- can this really be happening in a shopping centre? Yes, incredibly, it can. Richard, using a radio mic, plays his solo in 'Flip Flop and Fly' from out in the audience while Dave 's lying on the stage getting his picture taken- he later admitted that he had trouble getting back up again! Then, suddenly, the show takes a dangerous turn- as we start 'Do You Love Me' with Pete singing 'you broke my heart' over my guitar chords, there's a loud thud behind me, I wonder what it was and turn around to see what's happened, only to see Chris sprawled out between the drum and keyboard riser. I tap Pete on the shoulder, tell him to stop the song, he asks for medical assistance as Chris isn't moving- then tells Mike to sing the song and gets behind the keyboards! With Chris receiving medical attention and me yelling chords at Pete we get through the song (Squirrel and Tracy helped Mike out in the bits he didn't know!) before I remember that we play the song as a medley with 'Shake Your Tailfeather' and the look on Pete's face says he's not looking forward to the piano intro... as we get to it I shout something like 'don't worry I'll play it'- and incredibly I do! I've no idea what I played (on the guitar, in case you're thinking that I suddenly learned how to play piano like Ray Charles!) but everyone seemed to think that it sounded ok... by now Chris is back on his feet but looking shaky, tells Pete he's ok and we swing into 'Mustang Sally', the place is going wild and the last 2 songs 'River Deep Mountain High' and 'Gimme Some Loving' cause a near riot. We encore with 'Jailhouse Rock' and Pete says goodnight but no one's going anywhere so we return for 'Sweet Home Chicago' with everyone getting a solo and audience scenes of what might best be described as 'mass hysteria'. An unforgettable gig.

Afterwards in the dressing room I ask Chris what happened- he's not sure, he thinks he tripped over the monitor or something, thought he'd broken his arm but it seems to be ok now. Ronnie takes us across to the Spiga pasta and pizza restaurant opposite where we'd just played for a much needed meal after which it's time to head back to The Hotel Ibis near Zurich Airport where we check in; I'm sharing with Squirrel in room 539, we go in to find it's only got a double bed so we stumble back down to reception amid much confusion- the porter comes back up to the room with us, puts a key in an otherwise innocent looking lock under the window ledge and a bed miraculously drops down out of the wall. On another day this might have seemed a surreal moment- but not on this day, where logic and proportion had long since left the building. We join Pete down in the bar, 'Prime Suspect' is on the T.V. and there are 3 likely lads sitting at the bar telling tales of drunkenness and cruelty. We reflect on how quickly we've got used to the smoking ban in this country, on our chances of playing at The Montreux Jazz Festival next year and, most of all, on a day that had against all the odds had turned out to be a very good one indeed- in the end.
Posted by Leigh Heggarty at 7:51 pm